Anna (Anya) Demidova was born on April 23, 1988 in Moscow, Russia. She started dancing when she was just 6 years old in an after school program at the local community center, following the footsteps of her older sister, 7 times world champion Katusha Demidova. At the age of fifteen Anna won the British Open Junior Ballroom Championship and the Ireland Open Championship.

After graduating from high school in Moscow, Anna moved to New York city, to live with her sister and pursue her dancing career. As a youth competitor Anna and her partner Andrey Begunov won all of the major competitions in U.S. and after becoming the United States Youth Champions they represented the U.S. at the World Championships, where they made the finals. 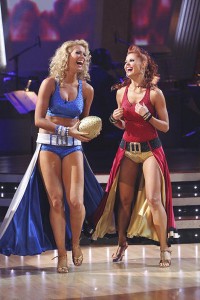 guaranteed her the spot as a professional dancer on season 9. She was partnered up with Michael Irvin and together they lasted in the competition for 7 weeks.

Practicing and teaching takes up most of Anna’s time, but in her spare time she has also taken up modeling and acting. After attending the New York Film academy, Anna appeared in a few independent films.